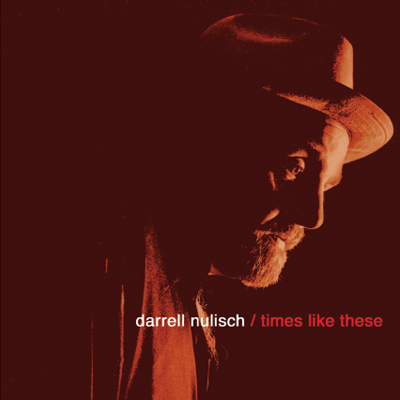 Poignant words expressed by one of today’s premier soul and blues vocalists, Darrell Nulisch on the title track of his CD, Times Like These.

Times Like These is an exquisite offering from Nulisch who gives a dazzling performance in response to his 2000 W.C. Handy Award nominated I Like It That Way (Severn).

“This is my best recording to date,” notes the regular front man for James Cotton’s current touring outfit. “It shows a lot of growth in our song writing and the overall sound is much richer.”

“I was fortunate to be able to use most of the musicians that I normally tour with on this record . . . and to have Willie Henderson do the horns—it just made all the difference,” says Darrell. “It’s a collective work and we seem to have raised the bar significantly.”

Indeed, Darrell Nulisch and company have set new standards for this twelve-song collection of soul and blues. Six originals penned by Nulisch and Gomes keep company with an equal number of covers including Ray Charles’ “Snow is Falling,” where Moeller turns in a career-topping performance, and Ashford & Simpson’s funky, soul-driven “Running Out.”

The basis for Darrell’s signature sound has always been his love and understanding of Southern soul. He captures that magnificently in his version of Junior Parker’s “I Found Love,” showcasing Darrell’s impeccable phrasing, evoking that classic Memphis feel.

“This record shows my band’s willingness to ‘get out of the box,'” states Darrell, “to try more obscure things.” Offerings like their scorching remake of Little Milton’s “Lonely Man,” complete with Moeller’s fiery fretwork and resounding horns, and Gomes’ silky smooth “Handle It With Care,” leave plenty of chances to tap into a wealth of creativity.

Darrell’s Blues-soaked “Good Thing” has a classic Bobby Bland feel—slow burning with lush horn lines and an unforgettable vocal performance. His version of the Temptations’ “Don’t Look Back,” (a song also made famous by Peter Tosh and Mick Jagger) is made new as Darrell puts a Southern spin on the Motown classic. “I’ve always wanted to record a song with more immediate recognition,” explains Darrell. “Most of the covers I pick are lesser-known, so choosing this song and doing it justice is a great moment for me.”

In typical Nulisch fashion, he offers up “Something Else,” a stripped-down Texas shuffle featuring David Maxwell at the keys and Darrell on harmonica, belts it out in true Otis style on Mr. Redding’s “That’s a Good Idea,” and closes the set with the joyful “Right Here at Home,”—the perfect ending to an inspired work of contemporary soul/blues.

Check out Darrell’s entire Severn catalog: The Whole Truth; I Like It That Way; Goin’ Back to Dallas; and Just For You.