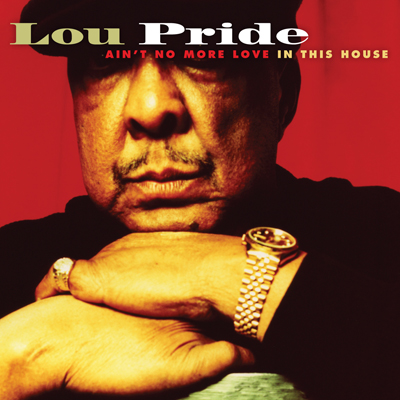 Ain’t No More Love In This House

Severn Records is proud to release the final recording by late soul-great Lou Pride, Ain’t No More Love In This House, which showcases Lou’s work in the final years of his life.

Over the course of many months into early 2012, Lou had been recording the new album, and while his time on earth was to end soon thereafter, his powerful soul-drenched voice remained strong throughout the sessions. The proof is evident on the 11 tracks of Ain’t No More Love In This House, which features four Lou Pride originals, as well as his distinctive takes on several cover songs, including an amazing version of the Simply Red classic, “Holding Back the Years,” which closes the album and can only be described as “transcendent.” It’s a fitting conclusion to a landmark album that will leave an indelible legacy of the artist’s career.

Other remarkable performances appear on the new CD: “I Didn’t Take Your Woman,” which echoes the original Ann Peebles classic sound on Hi Records (with the genders reversed); Lou’s soulful version of “Never,” a song recorded by several reggae singers; “I Gotta Move On Up,” previously done by Luther Allison; and Lou’s sentimental, personal favorite, “Daddy Don’t You Walk So Fast.”

Check out Lou’s other titles on Severn Records: Words of Caution; The Memphis/El Paso Sessions; and Keep On Believing.

It is with great joy that we are releasing the final work of master soul-singer Lou Pride. Not only was Lou an extraordinary talent, but he was also a generous human being always willing to help out when he could. Lou never complained about the fact that stardom and huge sales seemed to elude him throughout his career and was appreciative of any help he could get. It was a genuine honor to document his music and bring it to the world. Now that over a year has passed since his untimely passing, I felt it appropriate to release his final album to his loyal fans. Maybe as the years go by I will be able to listen as they will. We’ll miss you, Lou. — David Earl