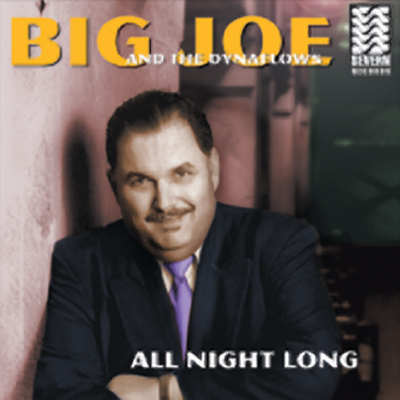 BIG JOE AND THE DYNAFLOWS

His powerful voice hearkens back to the days when Joe Williams was fronting the Count Basie Orchestra and Wynonie Harris was singing for bands like Duke Ellington, Tommy Dorsey and Cab Calloway. Yet Big Joe Maher has a style all his own as heard on his Severn Records recording, All Night Long.

All Night Long features the music Big Joe & the Dynaflows love best: blues, New Orleans swing and rock & roll. The disc opens with the title cut where Joe tells a story about a woman who won’t stop dancing. With the infectious swinging beat, its no wonder Joe’s dancing lady pleads for the band to play “all night long.” As with their previous release on Severn Records, I’m Still Swingin’, Joe and the boys take the listener to New Orleans where they experience the second-line beat of “Down In Louisiana,” and the rocking Fats-Domino-flavored version of “My Baby’s Tops,” which highlights Derek Houston (The Iguanas) on tenor sax.

Maher reaches deep into the roots of blues on his original “Move It or Lose It,” where the horn section becomes the perfect backdrop for a tasteful guitar solo by Ivan Appelrouth. Other standouts include the up-tempo “Really Breaks My Heart,” a tongue-in-cheek number about a relationship gone bad, and the gospel-infused “Church of Your Love” where Joe shows his tender side while Benjie Porecki lays down some soulful Hammond B3 tracks. And check out “Ham Hocks,” the single that swept through dance clubs in the Carolinas; it features Kaz Kazanoff (Black Top Records) on sax and is Joe’s personal tribute to some of his favorite things from the south: A good woman who “gives me ham hocks, green beans and candied yams.”

Check out Big Joe’s other Severn titles: You Can’t Keep a Big Man Down.

If walls could talk, then the walls of the home I grew up in would wreak of rhythm & blues and rock & roll. I’ve always considered myself a very fortunate individual to have a father who loved this music that has become entrenched in my heart and soul. From the very first time I heard Louis Jordan & His Tympani Five (circa 1955) playing “Caledonia” with Mickey Baker’s blistering guitar solo, I knew I dug this music. Considering I was only three years old, I guess it was all meant to be. Ever since then I’ve been infatuated with rhythm & blues—whether it was B.B. King, O.V. Wright, Ray Charles, Percy Mayfield or any one of another 100 singers and or players—I wanted to keep this music that is so close to me alive.

As we start the 21st century not much has changed. I’m still out there playing and recording the music I love so. And thanks to my good friend, David Earl at Severn Records who gives me the opportunity to bring you right in your own home, the same feeling I had when I first heard this great music. So sit back and get ready to party All Night Long. — Big Joe