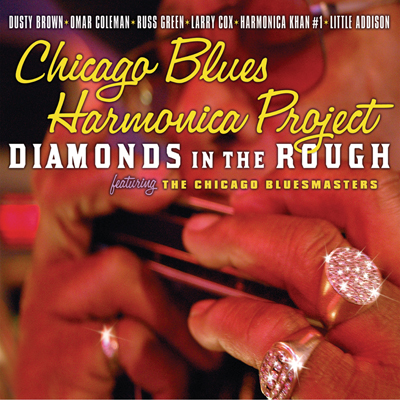 Diamonds In the Rough

Almost every legendary figure in the history of blues harmonica at one point or another called Chicago home. The popular misconception is that those days are long gone, and if you only look as far as the downtown tourist joints, you might believe the rumors of the demise of blues harp in the Windy City. But if you’re willing to look a little deeper, off the beaten path, you’ll find that the legacy of the giants of Chicago blues harp lives on. There are a handful of veterans from the golden years still plying their trade, and passing the flame on to a generation of young disciples who are wringing the blue notes out the reeds for all they’re worth. This CD spotlights six of these rare performers including Dusty Brown, Larry Cox Harmonica Khan #1, Russ Green, Little Addison, and Omar Coleman.

This CD is dedicated in memory of Harmonica Khan #1; he was right, we’ll never see anyone quite like him again.