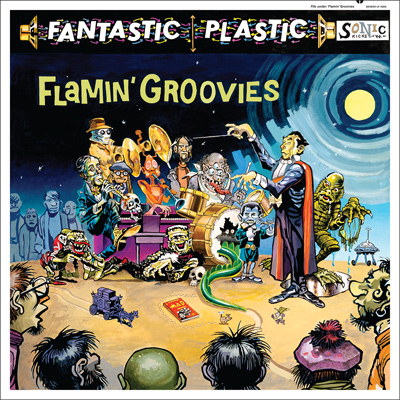 Rejoice, rock ’n’ rollers: San Francisco’s Flamin’ Groovies are returning with Fantastic Plastic, an all-new album of high-energy, pop-inflected original songs that bring together the band’s prime movers of the ’70s, singers-guitarists-songwriters Cyril Jordan and Chris Wilson for the first time in 38 years.

Produced by Jordan and Joel Jaffe (who also contributes guitar) mostly at Studio D in Sausalito, Calif., and due Sept. 22, 2017 on the band’s own independent imprint Sonic Kicks Records and Severn Records (through MRI and RED Distribution), the collection features 10 fresh compositions co-written by Jordan and Wilson, plus covers of the Beau Brummels’ “Don’t Talk to Strangers” and NRBQ’s “I Want You Bad.”

The set reconvenes the driving forces of the Groovies’ storied Sire Records lineup, which cut the widely admired, warmly remembered magnum opus Shake Some Action (1976) and its follow-ups Flamin’ Groovies Now (1978) and Jumpin’ in the Night (1979), which fused the band’s ‘60s-bred rock classicism with the new-look voltage of punk rock.

Jordan and Wilson parted company in 1980, and both men went on to enduring work as keepers of the rock ’n’ roll flame — the former with the Groovies and his successor act, Magic Christian, the latter with England’s Barracudas and his own solo albums.

The two musicians were reunited in 2013 in London, Wilson’s home at the time, where Jordan and co-founding Groovies singer-guitarist Roy Loney played a show backed by Miriam Linna and the late Billy Miller of Brooklyn’s A-Bones with Ira Kaplan of Yo La Tengo.

Jordan recalls, “I was being interviewed by somebody while I was in Brooklyn, and I was asked if it would be OK, if Chris showed up, for him to come on stage. The idea hadn’t even occurred to me until that moment. I said, ‘Of course he would be welcome.’ When we went to London and I got to the gig, I stepped backstage and there he was. Both of us broke down and we hugged each other.

“After that, the word got out that Chris and I were back together — not really working and performing, but that we had made up — and offers started coming in. Before we knew it, we had a generous offer from Australia to play five shows with the Hoodoo Gurus. We called up a friend in Tokyo and added a few more shows. We got kickstarted, and we’ve been touring ever since.”

As a result of the regular dates, the Groovies would assemble in San Francisco for rehearsals. Jordan recalls, “The second time we got together, I said, ‘Let’s go to Sausalito, let’s do some recording. If we’re going to cut an album, let’s keep going like we were in the days with Sire, writing original material in the style that we’ve chosen.’ Every time we got together, we’d go in the studio and lay down two or three basic tracks, and then I would start overdubbing, and Chris would come down and we’d do vocals. It’s taken us almost three years to do the album — recording it that way, we had to wait until the next tour, and the guys would come into town and start up again.”

Jordan and Wilson began writing together again without missing a beat.

“It was 33 years that we hadn’t seen each other — we’re talking three decades,” says Jordan. “But when we got back together and I started showing him the musical ideas I had for [the new song] ‘End of the World,’ he immediately came up with the second verse. It was as if time and space hadn’t affected us. It was the same as it was back in 1979 when we were writing the songs for Jumpin’ in the Night. We went back and locked into that. It’s really amazing.”

Fantastic Plastic was recorded mainly with founding Groovies bassist George Alexander and the band’s latter-day drummer Victor Penalosa, with assistance from members of the Fabulous Thunderbirds; the instrumental “I’d Rather Spend My Time With You” was cut with bassist and noted producer-archivist Alec Palao and Tubes drummer Prairie Prince.

The album is a storming collection of top-flight originals — including the 2016 single “Crazy Macy” and the stinging new lead-off track “What the Hell’s Going On” — that blends classicist touches of the Beatles, Stones, and Byrds with the group’s immediately recognizable sound.

The vinyl single for “Crazy Macy” b/w “Let Me Rock” was released last year on Burger Records, who will also be releasing additional 45’s, as well as the cassette version of the album. (Burger is one of the foremost youth oriented rock labels in America, and a promoter of numerous annual festival events, including the Burger Boogaloo in Oakland which the band played last year.)

Jordan says of the album’s inevitable, smartly selected covers, “We’ve always wanted to do some Beau Brummels stuff, so Chris and I decided to do ‘Don’t Talk to Strangers.’ We cut a version of NRBQ’s ‘I Want You Bad’ that wasn’t officially released 30 years ago, and when we got back together we decided to put it back into the set, and then we decided to record it for the album. We do a real pop version of it.”

Jordan also contributed the album’s cover illustration: a homage to Mad magazine veteran Jack Davis’ artwork for the 1959 novelty album Monster Rally. It was as fresh and unexpected as a . He says, “I met Jack Davis a couple of years before he died, and I told him, ‘I’ve got a band, I know you’ve done a couple of album covers, and I’d love to have you draw a cover.’ Anyway, Jack died, and I thought, ‘To hell with it, I’ll do Jack.’ You know, I used to work for Walt Disney, doing Mickey Mouse comics back in the ‘80s.”

The Flamin’ Groovies’ forthcoming summer/fall 2017 tour dates on the East Coast, in Europe, and in the Midwest will introduce the band’s new rhythm section: bassist and well-known Northern California power-pop singer-songwriter Chris von Sneidern and drummer Tony Sales, son of the like-named veteran of David Bowie and Iggy Pop’s bands.

“I’m really, really jazzed about this new lineup,” says Jordan. “We have exactly the same tools that the Beatles had: Everybody sings, we got bass, drums, we got rhythm guitar and lead guitar.”

On the road, the regrooved Groovies will be greeted by fans with five decades of ardent devotion behind them and a young new breed of listeners swept up by the group’s recent shows. Jordan notes, “During the last two years of touring, no matter where we were, whether it was Hollywood or Stockholm, we got all these young girls coming to the shows. It’s nuts, man!”

Their all new album of all new hits!
Flamin’ Groovies – Fantastic Plastic

Some said it couldn’t really be happening; that it was just hype. And the fabulous Flamin’ Groovies proved them wrong. Others said they couldn’t last more than a month; that it was a retro act. The Flamin’ Groovies proved them wrong too. Then, all of a sudden people began to wonder if all the Groovies’ fans worldwide hadn’t really discovered something after all.

But you, the Groovies’ fans knew all along. You knew that the Groovies really do have a style and a sound that rocks out. And it’s simply because you like them (and they like you) that this Fantastic Plastic CD has happened.

And now here’s what you’ve all been waiting for—a new Groovies album with all new Groovies songs, most of them, like End of the World; Crazy Macy; Cryin Shame, She Loves Me, What the Hell’s Goin’ On, and others, composed by that hit song-writing team of Cyril Jordan and Chris Wilson.

These are the new favorites by the boys who have proven to be your favorites. The Groovies are back to KICK OUT THE JAMS