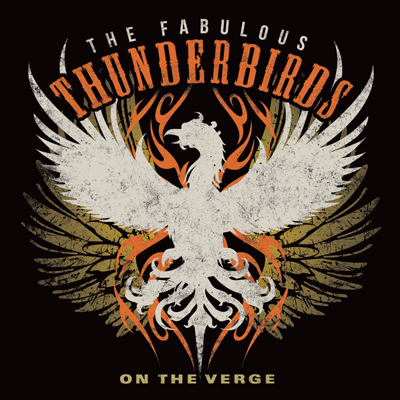 The Fabulous Thunderbirds are On the Verge of an exciting new era as they release their breakout recording for Severn Records. Anchored by the big voice of original front man, Kim Wilson, On the Verge is a departure for the legendary blues rockers as they explore their soulful side with 10 original numbers recorded at our very own state of the art Severn Sound Studio.

On the Verge marks a new beginning for the band with Wilson saying, “we’re defining our own genre.” Using cutting edge technology and a collaborative, free-flowing creative process, the T-Birds have crafted a fresh sound, one that’s sure to satisfy diehard fans while bringing new blood into the fold of the band’s faithful legion.

Taking cues from unexpected influences like O.V. Wright (“Too Much Water”) and Junior Parker (“That’s the Way We Roll”), the T- Birds kick things off with their single, “I Want to Believe,” a driving number with a Lenny Kravitz-meets-Staple Singers vibe. “Lovin Time” has a Los Lonely Boys feel, while the Anker/Wilson original “Hold Me” melds classic rock with soul and reggae.

Though the title may hint at a genre, don’t let it fool you; “Runnin’ From the Blues” is indeed about hardships, though disguised as a pop number; “Got To Bring It With You” is a soulful rocker; while the final track, “Lonely Highway” nods to the blues of the Stax tradition. “Do You Know Who I Am?” and “Diamonds Won’t Kiss You Back” round out the all original 10-song offering.

In a career spanning over three decades, the Fabulous Thunderbirds are On the Verge with their most mature recording to date  . . . on the verge of greatness that is.

Check out Kim’s other Severn release with Muddy Waters’ son, Mud Morganfield: For Pops (A Tribute to Muddy Waters). Johnny Moeller also has one on our imprint — check out BlooGaLoo!