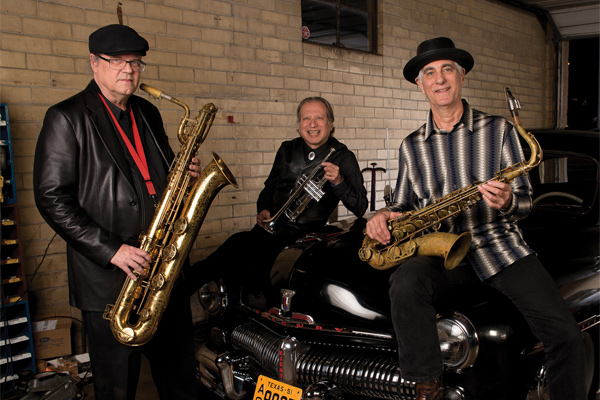 The Texas Horns are a 3-piece horn section founded in 1997 by Mark ‘Kaz’ Kazanoff, John Mills and Al Gomez.

Kaz lives in Austin, TX, and sings, plays tenor sax and harmonica, writes songs, and does arrangements for The Texas Horns. Born in Northampton, MA, Kaz was raised on the Blues in Chicago, where he heard and played with stars like Magic Sam, Howlin Wolf, Otis Rush, Muddy Waters, Otis Spann, Bob Margolin, Little Walter, Big Walter, and many others. Since 1981, Kaz has been a big part of the Austin, TX., music scene, playing with a cavalcade of Blues and Jazz stars, first as a member of the famed Antone’s House Band in the 1980’s, and later as the leader of The Texas Horns. As horn player, arranger, producer and band leader, Kaz has recorded on over 250 CD’s. Kaz won a Grammy Award for his work on Delbert McClinton’s 1989 CD “Live From Austin TX.” His contribution to Anson Funderburgh’s 1986 CD “Sins” won him several awards including a Handy Award (now Blues Music Award). Kaz is currently nominated for best horn player in the Blues Music Awards. He has played and recorded with Marcia Ball, Jimmie Vaughan, Earl King, Anson Funderburgh, Johnny Nicholas, John Nemeth, Cornell Dupree, Pine Top Perkins, Robert Ward, and literally dozens of other blues and jazz greats. Kaz holds a doctoral degree in music from The University of Texas Austin.

John Mills iives in Austin TX, and plays baritone sax, writes songs, and does arrangements for The Texas Horns. John Mills has long been one of Texas’ most in-demand saxophonists, arrangers, and composers. He not only plays and writes across a complete spectrum of jazz styles — from mainstream to experimental, from big band to fusion to chamber jazz, but he is also active in virtually every other genre of contemporary music. His interests and creative experience extend to blues, R&B, salsa, classical, world music, country, funk, rock, folk, gospel, and more — all of which he pursues both in concert and in the recording studio. During his diverse professional career he has performed, arranged, and composed for a vast number of CDs, film/TV soundtracks, and jingles.

Besides his prolific work as a studio performer, John has produced and recorded three CDs for Fable Records under his own name: Caffeine Dreams, Invisible Designs and Flying Blind, all of which feature exclusively his innovative original compositions. Mills has composed extensively for both professional and university jazz ensembles, including many charts published by Walrus Music. His If Memory Serves, was awarded First Prize in the ArtEZ Jazz Composition held at the 2008 Grolsch International Jazz Festival in Enschede, the Netherlands, and most recently he was awarded the 2019 SONIC Award for Best Big Band Composition by the International Association of Jazz Composers and Arrangers (ISJAC).

In his musical travels John has performed in concert with such jazz luminaries as Maria Schneider, Kenny Wheeler, Carla Bley and Steve Swallow, played shows with such R&B icons as Bonnie Raitt, Dr. John, Ray Charles and Aretha Franklin, and written commissioned orchestral arrangements for such diverse artists as Asleep at the Wheel, Rosanne Cash, Indigo Girls and David Byrne.

Dr. Mills has given masterclasses in countries including Italy, Germany, Russia, Denmark, Slovenia, Guatemala and Chile, and is a Professor of Jazz Studies at UT-Austin’s Butler School of Music, where he teaches jazz saxophone, composition, arranging and history.

Al Gomez, Jr. lives in San Antonio TX, and plays trumpet, writes songs, and does arrangements for The Texas Horns. Al is a professional San Antonio musician who received his Bachelor of Music from UTSA, and Master of Music from Texas State University. He is an Adjunct Professor at Palo Alto College. Al has played with the San Antonio Symphony, numerous Tejano artists, Rhythm and Blues, salsa, and jazz artists, and for a number of Broadway Musicals at the Majestic Theatre. He was inducted into the Tejano Hall of Fame in 2013. Al is a member of the Westside Horns, The Texas Horns of Austin, the Texas Tornadoes, and has recorded over 100 albums with numerous Tejano artists. Al has also recorded with Los Lonely Boys, and played and recorded with Doug Sahm. He won a Latin Grammy Award with “Roger Velasquez and the Latin Legends” in 2018.

The Texas Horns released their 1st CD, “Blues Gotta Holda Me” on the Vizztone Label in 2015. A new CD, “Get Here Quick” will be out in the Spring of 2019 on Severn Records. The Texas Horns do their own headlining shows in Texas, and also continue to work regularly with Jimmie Vaughan, Whitey Johnson (Gary Nichoson), and Anson Funderburgh. 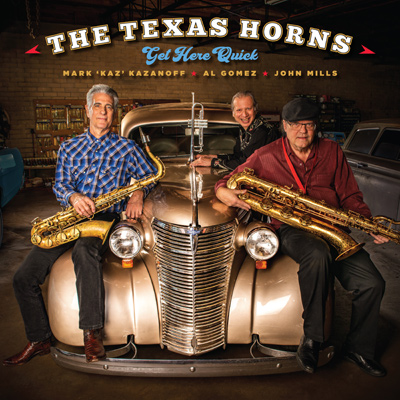