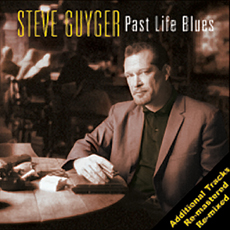 First released in 1999, Past Life Blues captures Steve’s roots-based delivery, considered by many as the best in the business (“Steve is the bet harp player I’ve ever heard!” William Clarke). Recorded with no overdubs, what you hear is what you get – pure Blues delivered in the tradition of the Chicago masters. Past Life Blues confirms Steve Guyger’s place as one of the greats and is a must for Chicago Blues fans.

Ask many top harmonica players whom they consider today’s most underrated harpist and chances are good that Steve Guyger’s name will come up. And it’s true. As a master of traditional harp stylings, he has few equals.

“Past Life Blues” is his most satisfying recording to date . . . Great stuff!”

This record is dedicated to the memory of James A. Lane (a.k.a. Jimmy Rogers).